This is one of the smaller objectives plus only the PVLAN concepts and practices are new – VLAN support remains relatively unchanged from VI3 (although the vDS and it’s associated VLAN support is new).

VLANs are a network standard (802.1q) which are fully supported in vSphere. They can be used to minimise broadcast traffic and as a security measure to segregate traffic (although like any technology there are weaknesses). Typical uses for VLANs with vSphere are to isolate infrastructure (vMotion, iSCSI and NFS) traffic and VM traffic.

There are three main ways of using VLANs with vSphere (covered in this VMware whitepaper);

In the Cisco world you set a port to be an ‘access port’ or a ‘trunk port’ if it’s going to carry multiple VLANs. VLAN IDs are 16 bit values giving a range of 0-4095. 4095 is used within vSphere to mean ‘all VLANs’ and is how you configure a portgroup when using VGT.

For standard vSwitches you configure VLAN tags on portgroups. This configuration is done at the ESX host using the VI client (Configuration -> Networking);

Use a specific VLAN ID depending on the isolation required (VST)

NOTE: Avoid using VLAN1 (native VLAN for most Cisco kit) as this can inadvertently expose traffic you may not mean to expose.

For distributed switches you configure VLANs on both dvPortGroups and dvUplinkPortGroups (with the option to override at the dvPort level when enabled). This is done in vCenter using the VI client; 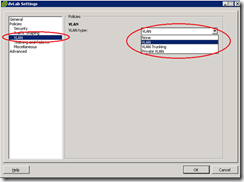 From the ESXi Configuration Guide – “PVLANs are used to solve VLAN ID limitations”. They allow more fine grained control over subsets of hosts without requiring a dedicated VLAN for each group, cutting down on network administration (here’s a good explanation and diagram). Eric Sloof’s video on configuring PVLANs and dvSwitches is also worth a watch (from 24mins for the PVLAN part). 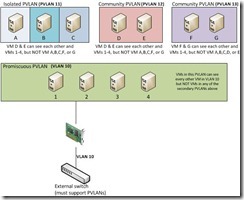 NOTE: To test PVLANs in a lab environment you could run multiple virtual ESX hosts on a single host (along with a virtual router such as Vyatta Core). This was the traffic never reaches the physical network so you don’t need a PVLAN capable switch. 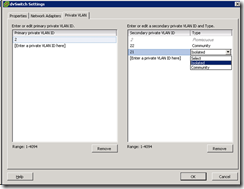 NOTE: You can only administer VLANs at the command line – PVLANs are only configured in vCenter.