UPDATE Sept 2015 – there is new functionality in the vSphere Web Client (v6.0u1) that allows you to delete all partitions – good info via William Lam’s website. Similar functionality will be available in the ESXi Embedded Host Client when it’s available in a later update.

UPDATE March 2015 – some people are hitting a similar issue when trying to reuse disks previously used by VSAN. The process below may still work but there are a few other things to check, as detailed here by Cormac Hogan.

Over the Christmas break I finally got some time to upgrade my home lab. One of my tasks was to build a new shared storage server and it was while installing the base ESXi (v5, build 469512) that I ran into an issue. I was unable to add any of the local disks to my ESXi host as VMFS datastores as I got the error “HostDatastoreSystem.QueryVmfsDatastoreCreateOptions” for object ‘ha-datastoresystem’ on ESXi….” as shown below;

I’d used this host and the same disks previously as an ESX4 host so I knew hardware incompatibility wasn’t an issue. Just in case I tried VMFS3 (instead of VMFS5) with the same result. I’ve run into a similar issue before with HP DL380G5’s where the workaround is to use the VI client connected directly to the host rather than vCentre. I connected directly to the host but got the same result. At this point I resorted to Google as I had a pretty specific error message. One of the first pages was this helpful blogpost at Eversity.nl (it’s always the Dutch isn’t it?) which confirmed it was an issue with pre-existing or incompatible information on the hard disks. There are various situations which might lead to pre-existing info on the disk;

END_OF_DOCUMENT_TOKEN_TO_BE_REPLACED

Host Profiles are a new feature to vSphere 4 but are only available to Enterprise+ licencees. As my company haven’t yet found a need for Enterprise+ features I’d not really worked with them before so this section was new to me. Interestingly the main reference given in the blueprint is the Datacenter Administration Guide which has very little about host profiles. The ESX/ESXi configuration guides have a small section on host profiles but not much, so the best reference is probably the VMware Host Profiles – Technical Overview whitepaper.

Basically host profiles are the equivalent of Microsoft’s Group Policy, but for VMware hosts.

REAL WORLD: When building a new ESX/ESXi host it will have a 60 day eval period with all features enabled so even if you don’t have Enterprise+ licencing you can use host profiles for initial configuration.

END_OF_DOCUMENT_TOKEN_TO_BE_REPLACED

This is another objective that’s hard to quantify – experience will be the main requirement! There are some great general purpose resources out there;

Note that resxtop (built in to the vMA) does not offer the ‘replay’ mode available in ESX classic. Source: VMworld session MA6580, vMA Tips and Tricks. END_OF_DOCUMENT_TOKEN_TO_BE_REPLACED

Contains both vSS and vDS entries;

In the example VM below it has three vNICs on two separate vDSs. When troubleshooting you may need to coordinate the values here with the net-dvs output on the host;

NOTE: Entries are not grouped together in the .VMX file so check the whole file to ensure you see all relevant entries. 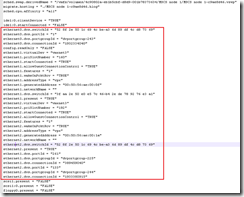 The host configuration file (same file for both ESX and ESXi);

Like the .VMX file it contains entries for both switch types although there are only minimal entries for the vDS. Most vDS configuration is held in a separate database and can be viewed using net-dvs (see section 6.3.7).

END_OF_DOCUMENT_TOKEN_TO_BE_REPLACED

This section overlaps with objectives 1.1 (Advanced storage management) and 1.2 (Storage capacity) but covers the multipathing functionality in more detail.

The PSA layout is well documented here, here. The PSA architecture is for block level protocols (FC and iSCSI) – it isn’t used for NFS.

There are four possible pathing policies;