For the last couple of years adoption of ‘converged infrastructure’ has been on the rise but until recently it wasn’t something I’d needed to understand beyond general market awareness and personal curiosity. I was familiar with some of the available solutions (in particular VCE’s vBlock and Netapp’s Flexpod) but I also knew there were plenty of other converged solutions which I wasn’t so familiar with. When the topic was raised at my company I realised that I needed to know more.

Google research quickly found a converged infrastructure primer at Wikibon which had the quotable “Nearly 2/3rds of the infrastructure that supports enterprise applications will be packaged in some type of converged solution by 2017“. The Wikibon report is well worth a read but it didn’t quite answer the questions I had, so I decided to delve into the various solutions myself. Before I continue I’ll review what’s meant by ‘converged infrastructure’ with a Wikipedia definition;

In a series of blogposts over the coming months I’m planning to summarize the converged offerings from various vendors including VCE, Netapp, HP, Oracle, IBM, Dell, Hitachi. If I find time I’ll also cover the newer ‘hyperconverged’ offerings from Nutanix, Scale Computing, Pivot3 and Simplivity. This is largely for my own benefit and as a record of my thoughts – there’s quite a bit of material out there already so it may turn into a compilation of links. I don’t want to rediscover the wheel!

Q. Will this series of blogposts tell you which converged solution you should choose?
A. Nope. There are many factors behind these decisions and I (unfortunately) don’t have real world experience of them all.

CI solutions vary considerably in their degree of convergence and use cases. Steve Chambers (previously of VCE, now CanopyCloud) has a good visualisation of the various solutions on a ‘convergence’ scale. If you haven’t read it already I’d strongly recommend you do so before continuing.

Before I delve into the solutions let’s have a look at some factors which are common to them all – there’s no point looking at any solution unless you know how it’s going to add value.

There’s a thought provoking article at Computer Weekly discussing modular datacentres which takes the converged concept even further. Why bolt together building blocks in your datacentre when you can buy a complete datacentre in a box. Convergence on a larger scale! Next thing you know they’ll be using shipping containers for datacentres… 🙂

EMC’s white paper “Time for Converged Infrastructure?” – some good points but with an obvious bias

Containerized datacenters – is a box a good fit?

Overall I guess I feel disappointed. Over the last week I’ve been trying to keep up with developments from VMworld and to be honest it’s not been as tough as I thought because most of the announcements were already known quantities and very little ‘new’ information was given. I see this as a reflection of the growth and maturity of VMware – release cycles are getting longer, innovation takes longer to gestate, and the low hanging fruit of ‘wow’ features has been exhausted (and having written that I see Chris Wolf’s article which says much the same thing. I’m in good company). Chris Wahl’s blog has full details of the new stuff.

UPDATE 4th Sept: It’s been pointed out to me that as a vExpert and blogger I do tend to have early access to both information and beta releases so what I consider new and what most attendees consider new is different. Fair comment.

Eric Siebert, a long time veteran of VMworld and the technology involved, has a great writeup of the main announcements along with his thoughts, which largely mirror my own. Maybe we’ve been spoilt over the years by the ‘cool’ factor of the vMotion and svMotion, maybe I woke up on the wrong side of bed, or maybe VMware aren’t delivering the goods as they used to.

vSphere has been on a two year release cycle for major versions but that seems to have slipped. The next release of the core vSphere platform will be out later this year (probably at VMworld Barcelona as with v5.1 last year) but even when it does v5.5 is not much to write home about;

If you look at the benefits they’re largely for the admin or behind the scenes. If I have to justify time and resource to upgrade my hosts, what benefit does the business get? I’m on Enterprise licencing, so precious little sadly. 🙁

vCloud Suite still isn’t as compelling as it should be

With public vs private vs hybrid cloud all the rage I can understand why VMware aren’t focusing on the hypervisor so I was expecting a big vCloud push. There was much fanfare about the launch of VMware’s public cloud, vCHS, but I’m still unconvinced;

After VMworld last year I speculated that VMware needed to accelerate their customer’s journey to the cloud or suffer and I don’t think this reshuffle/repositioning helps matters. For something of such strategic importance would you want to be an early adopter of the vCAC/vCD amalgamation? Dynamic Ops were initially a competitor to vCD, then post VMware acquisition they became mutually beneficial, and now vCAC is becoming the primary cloud solution. VMware have always excelled at promoting a vision which helped get ‘buy in’ – you knew that when you were ready for the next step it’d be waiting for you. Now I’m not so sure. On the bright side the pricing for the vCloud Suite seems better than I realised. Looking at pricing for vSphere Enterprise+ vs vCloud Standard it’s almost the same despite the fact you also get vCD, vCAC, and vCOPS with the vCloud suite.

UPDATE 1st Sept: A twitter conversation with Tom Fojta and Dave Hill, both of whom work for VMware (though tweets are their own) implied that vCD may not be retired but merely realigned because enterprise and service providers need different solutions. This makes more sense as it will at least minimise the disruption. Let’s hope there’s some official clarification from VMware soon as I’m not the only one with concerns.

UPDATE 4th Sept: VMware have now provided a directional statement which confirms how this will affect customers, how functionality will migrate to vSphere/vCAC, and clarifies that vCD will continue in use with service providers.

I’m not much of an end user computing guy as my company haven’t bought into it conceptually, and with the release of the Horizon suite earlier this year we finally have some of the products VMware have been talking about for the last few years. I’m excited about the possibility of desktops in the cloud but Brian Madden, a well known VDI guru, seems to think the vision is spot on but execution and delivery are lacking.

SDDC is a grand vision but can it succeed?

I like the idea of the software defined datacenter but it’s going to be a tough sell for VMware. It’s disrupting major technologies, networks and storage, which are well embedded in the datacenter which puts them in competition with many of their major partners.

Storage is going through an exciting time and VMware are now beginning to promote their storage credentials. With the addition of VSAN and vFRC they’re pushing vSphere storage towards the ‘software defined’ concept they’ve coined  although I was hoping for some advance on the Virsto acquisition. The announcements and sessions around NSX, VMware’s network hypervisor, do look interesting and if they can be successful we’re in for quite a ride! Maybe this is where VMware can recapture some of that magic they had four or five years ago. Even if they succeed the SDDC will arrive slowly because of financial, technical, and social factors. Given the potential complexity and disruption introduced by SDDC we need a clear value statement otherwise the perception may be that we’ll all be better off in a cloud where someone else manages it for us…

The process of writing and researching this article has actually made me more optimistic and I still think VMware have huge potential to innovate and disrupt (in a positive way) the datacentre of the future. I think I’m just grumpy because we still don’t have the VMTN Subscription! I’m sure I’ll soak up the boundless energy VMworld Barcelona generates and be back to my optimistic self later in the year. 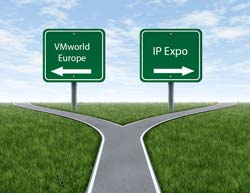 With VMworld in San Francisco, which I couldn’t attend, now a distant memory my thoughts have turned to attending the European replay to be held in Barcelona this October. As VMware have grown over the years so has the conference (see some stats and how competing conferences compare) and as I always tell my team it isn’t just a virtualisation show it covers all aspects of infrastructure. The downside is that VMworld isn’t vendor neutral (the clue is in the name!) so you won’t see Microsoft, Citrix, or Amazon solutions despite their increasing relevance to those interested in the enterprise cloud and virtualisation industry. I have to fund my own way to VMworld every year (though a blogger’s pass to the conference takes care of the lion’s share) so I’m definitely concerned with getting value for money.

This is the first year when I’ve questioned “is VMworld the best place to be?”

In the UK’s there’s a competing show, IP Expo, which for the last few years has clashed with VMworld Europe and does again this year. In the future I’m hoping this will change as the current venue, Earls Court, is due to be sold so alternative arrangements will have to be made. Unlike VMworld, IP Expo is vendor neutral so there’s a level playing field and you can investigate solutions and technology from all parties (hey, even Oracle are there for those 1% who use OVM!). VMworld has always focused on infrastructure more than the application tier and with the spinoff of Pivotal earlier this year that seems likely to continue whereas IP Expo tends to be more well rounded. It’s interesting to note that Annika Jimenez, lead data scientist at Pivotal, is a keynote speaker at IP Expo while the VMworld keynotes were remarkably Pivotal free.

I attended an early IP Expo event (last decade) but haven’t been since so bear that in mind when considering my points below. I spoke to Jane Rimmer who’s attended both shows and sees things from both the attendee and the exhibitor viewpoints but nonetheless I’m probably making some assumptions! A few numbers;

Why go to VMworld?

Why go to IP Expo?

Which will you attend and why?