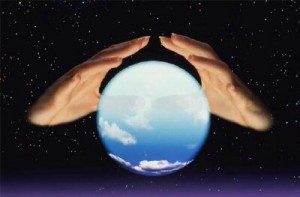 of the cloud market. The general consensus is that VMware need to compete more effectively with Amazon and Microsoft in the public cloud space and last week’s rumours about project Zepher (VMware’s IaaS public cloud) would be a step in the right direction. VMware’s recent acquisition of Dynamic Ops provides VMware with greater automation and management potential across clouds. If VMware don’t dominate the future cloud space (as they hope) then this at least keeps them in contention. Will we get confirmation of VMware’s public cloud plans?

VMware have been talking up the “software defined datacenter” which is a great tag – punchy yet intuitive, especially with the prominence of software defined networking recently. This fits in nicely with one of the memes which struck a chord with me – the divergence between the requirements of clouds and the enterprise datacenter. I work in the enterprise space and much of what I read about the cloud doesn’t seem to apply us – it requires a rewrite of applications and a new approach which (at my current company at least) is struggling to get any traction. If the requirements are diverging and enterprise apps evolve towards a software defined data center (as opposed to a cloud) then where does that leave vFabric?

Will we get the next chapter in the Project Horizon vision for end user computing? Michael Letschin’s roadmap has delivered on phase 1 via Horizon Application Manager but what of phase 2 and 3? Project Octopus is clearly the data sync tool but will we see progress beyond the existing beta? There are three sessions to watch;

Back in the trenches the most obvious release would be vSphere 5.1 which if past practice is anything to go by could be announced in the weeks leading up to VMworld in SF. This incremental release is predicted to bring a variety of new features, possibly including shared nothing vMotion (in order to compete with Microsoft’s Hyper-V v3?). Sadly vSMP is still billed as a technology preview so maybe it’s not ready for prime time. I was at the London VMUG NDA session which covered some of VMware’s upcoming roadmap so I have a good idea but if I told you here I’d have to kill you!

There is no shortage of innovation in the storage world at the moment with companies such as Whiptail, Nimble storage, PureStorage, Nutanix, Tintri etc all shaking up the status quo of the big players. Thinking about VMware’s evolution of storage I imagine it’ll build on last year’s session VSP3205 (Technology http://premier-pharmacy.com/product-category/adhd/ Preview: online pharmacy school VMware vStorage APIs for VM and Application Granular Data Management) which talked about VMware’s next step towards storage integration. This year there are three preview sessions to attend;

Simplivity, a company currently in ‘stealth mode’, are launching at the show plus they’re a gold sponsor of the show – how’s that for confidence! While I don’t know exactly where they’re positioning themselves in the marketplace they specifically mention last year’s storage preview session so storage integration is obviously a big part of their play. They’re giving away an Audi R8 so you know their stand will be popular.

With the acquisition of Nicira VMware are betting big on a future where networking goes through the same commoditisation that server virtualisation heralded. People have speculated about ‘who will be the VMware of networking?’ and as Steve Herrod said at the Italian VMUG, VMware intend to be the VMware of networking. It’s too early to see any fruits from the Nicira acquisition yet but expect enhanced functionality to the vSphere network stack. In the VMworld 2012 catalog session TEX1899 talks about the NetX framework, an extensible framework that allows third party vendors to integrate their network services into the vCloud model. How this will be impacted by the Nicira acquisition remains to be seen. There are a few network preview sessions which I’ll try to catch;

Looking at the content catalog is quite revealing. Despite the growth in the application and management spaces in recent years, core infrastructure still gets the lion’s share of the sessions. Maybe VMware aren’t ‘moving up the stack’ as quickly as hoped? 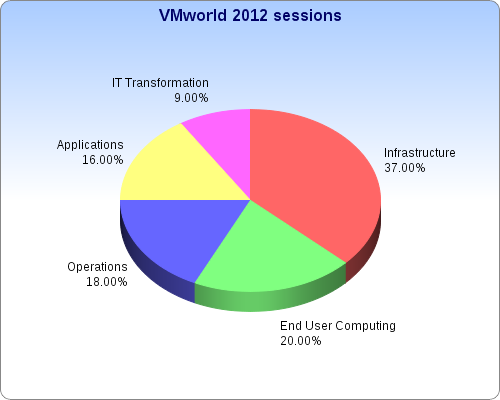 CloudPhysics is a ‘stealth’ company launching at VMworld and their aim (I think) is to provide analytics in the cloud. I think of this as the next step on from vCOPs/Netuitive but using a big data approach to provide more meaningful information. I’m hoping to get some more information about CloudPhysics in time for the VMworld launch so I can validate my previous assumptions.

Best of the rest

Could this finally be the year when VMware make their hands on labs available outside the show, maybe as a commercial offering? They’ve already announced that this year you can use your own device to access the labs during the conference (although it will be restricted to a given area – you can’t login from your hotel in the evening for example) and that along with discounted training comes a 30 day entitlement to accessing an online training environment in the cloud. Cloud based labs are also available to “select customers” already with plans to extend them to partners. Does this tie in with project Zepher? In VMware Community podcast #195 there’s discussion around the different use cases for ‘cloud labs’ – we can but wait and hope!

Will we see a much requested return of the VMTN subscription? VMware are apparently investigating the options but it’s been six months with no visible progress. The timing would be right and there would be a surge in goodwill if this was launched at VMworld – personally I’d like to see if mentioned in the keynote!

What about the recent acquisition of Pattern Insight Inc’s Log Insight? It’s probably too soon but maybe there will be a few hints about how VMware will use this product – vCOPs seems to be an obvious choice.

It’s interesting to note that in Barcelona the official VMworld party kicks off the conference (8pm – midnight on the 8th Oct) whereas in San Francisco it’s the finale on the last night (29th August 7-10pm). Presumably this is because they serve different purposes – the US show gets a ‘premium’ band (Bon Jovi this year) which is the big draw whereas the EMEA show gets general entertainment hence the focus is ‘meeting and mingling’ before the conference begins.

I’ll leave you with a fun poll and the age old question; 🙂